Drum and Bass Heaven, Past and Present 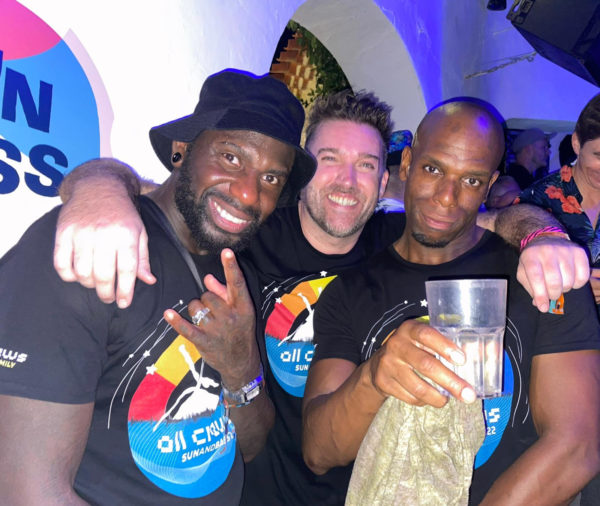 It’s T shirt weather all night. On the floor there are hands held high, fingers pointing higher, wrists encircled by wristbands. Some die-hards sport two or three wrist bands confirming years of allegiance. Their wide screen smiles are broader than broad. A-Sides’ mum Barbara and step dad Vince are always locked down in their corner. I couldn’t help asking: “When he was making tunes at home, would you ask him to turn the music down?” “No” retorts dad, “I’d make ‘im turn em up!” An MC dives into a supporting crowd. But by the time my mobile’s snapped the shot, he’s only visible upside down from his knees to his trainers. Hands in the air – legs in the air.

In the heat of the bass-driven night this is SUNANDBASS at its most intense. There’s a melee of madness in the DJ box as Goldie slams his hands down on A Side’s multicoloured Serato discs for the imperative rewinds and the stylus bounces clear across the plastic grooves. No faux MC rewinds here. It’s all by public demand. And Fats sings on cos it’s all in his flow, in his tone, in his words as a cool breeze flows through the warm night suffused with the subtle pine aroma.

The Ambra Night stage is open to the infinite starry firmament. Eyes closed in gentle ecstasy. A Guy Called Gerald mixes impassively alongside MC System and Fats singing passionately. There’s that feeling, you have after another of your best nights ever. Reluctantly hitting the road home, men shout, “Taxi!?” “No thanks.” we reply cos we know the best thing to do is take the longish walk home just to let those vibes rest comfortably in our souls. Recap the night and the way Fats wove his lyrics so tunefully all through the session. 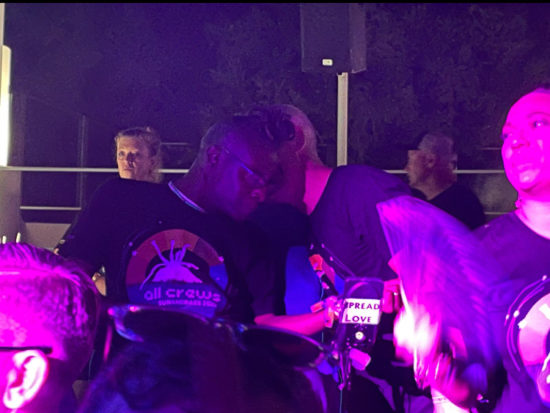 JB whispering some words of wisdom in my ear mid-set.. “I’ve died and gone to Drum and Bass Heaven B!”

MS has made the finicky business of getting tunes out of, and back into, their sleeves too time consuming when I have mixes to deal out. So Nadine -All Crews’ designer is in charge of tunes on the left deck. Daniel All Crews’ contributor handles the right deck. Rude FM’s DJ Staunch engineers the mixer. System is on the mic. The All Crews crew is the DJ.

Deck one spins… The sandy dance space before the stage is empty. People are sunbathing. A few tunes in it starts to fill. By the end of the intelligent section there are about ten people dancing.

Now there are too many people dancing to count. By the time I’ve teased and dropped Odyssey it is mayhem down there. I’m calm. I love being inside this musical machine with the mix runnin’ and beats bursting with the visceral intensity of a tempest. There’s a photo of Dan, Nadine, Staunch and I absolutely pissing ourselves, we’re delirious with happiness.

And after… I’m dazed. Can’t take it all in. There’s a huge cheer. Spliffs are coming at me from every direction. Daniel’s sayin’ “Bruv you can’t be droppin’ beats like that at 5pm on the beach!”

Anna who translated All Crews into Russian is next to Storm who’s sayin’ “Awesome set Brian. We taught you well.” GQ is laughing, shaking his head… “B… Me and Cleveland were coming up the beach, saw the commotion, heard the beats, we’re asking someone, “Who’s playin?” “Brian.” “Bryan Gee?” “No, Brian Belle-Fortune!”

My brain’s still spinning at +8, 45 rpms. I make excuses and roll away to deal with my head and run into Goldie saying, “You did us proud B.”

The honour of playing for the SUNANDBASS family is priceless. In years to come if anyone ever asks, I’ll say, “As far as DJing is concerned, La Cinta Beach was my finest hour.” 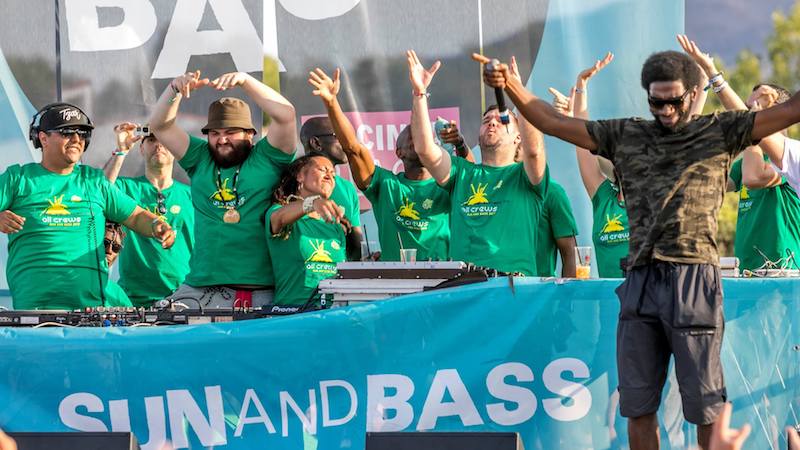